skip to main | skip to sidebar

Hello All and Thank You for visiting our blog. 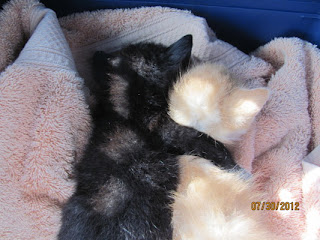 We rarely post here any more (not since November 2011)- for news on what's happening at CatVando please 'like' CatVando TNR on fb.

Thanks for your interest and support!
Posted by CatVando at 5:20 PM No comments:

Robin's Cats Someone recently asked about Robin's cats. Wish I had someone to update this on a more regular basis or had someone to do many of the other things I do so I could do updates on a more regular basis but alas, that too shall come! I'm delighted when someone asks questions. I never know who reads these posts. About Robin's cats. A quick synopsis by memory for the moment. Ella was adopted by a good friend of Robin's Helmut & Twilight were adopted to a family in Willmette. Tennyson & Rosie went to a young girl and her grandmother who'd lost their mom/daughter then the kittens they got before these two died. They are bringing both the young girl and the grandmother much joy. 5 Seniors went to DuPage Animal Care & Control and were accepted into their Senior Adoption program. I continue to check with them to get seniors in when they've adopted seniors out. This assures their being in the adoption program vs being euthanized. ( a note on shelters that euthanize for space. As much as I oppose killing of any sort, I completely understand the need. There are more cats than homes. To judge a shelter because they euthanize without adopting as many pets as possible is blaming the wrong party. They are doing the best they can to accomodate a difficult situation) Once a cat is accepted into their program, they stay until they are adopted. Alfred, the guy that had his ear canals removed is now Long Haul Trucker Alfred. He was adopted by a young couple with a big rig. Alfred spends his days on the 2nd bunk, roaming around the back 'room' of the cab and looking out the window (his favorite thing to do while here). 4 of the cats, who's names escape me, are in foster care waiting for adoption. 6 of the cats are still at Robin's housed - waiting for adoption. Ellie (who you may have seen on our FB page) sadly, was euthanized. She had a tumor in her ear, the size was initially hidden by an enormous absess. After 2 weeks of daily soaks and antibiotics, it was found that the tumor was too large to be operable. Tika, another wonderful cat, died of a form of cancer that now escapes me. She had a great life until the day she died in the arms of her loving foster mom. Robin had 22, not 26 cats when she died. Robin is in our thoughts as well as her cats. Her former car was donated by her husband and is now our 'cat mobile'.
Posted by CatVando at 9:46 PM No comments: 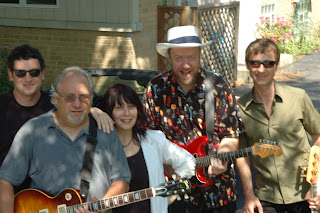 Funky Rockin' Blues Catzzzzzzzz
October 15, 7-10pm
FUNd Raiser featuring
Dawn O'Keefe & The Lucky Dogs
Underpass Restaurant & Lounge
9400 Grand Avenue - Franklin Park
Tickets $30 includes unlimited drinks and hor d'oeuvres
PROGRAM BOOK:
Like most animal rescue groups, we are at critical levels. Yard cats and pets are being abandoned as evicitions and foreclosures increase. We are having to sponsor the TNR fees for record numbers of cats. We are spending almost as much on medical fees for cats in dire need of medical attention. Our coffers are running dangerously low - and the cats keep coming. We're hoping you'll help us help the cats by coming to one of our events or by buying an ad in our Program Book to show your support.
We are selling ads in a beautifully designed Program Book to be distributed at our Funky Rockin' Blues Catzzz event. The Book will be handed out at our event, a placard with all sponsors will be on display at the event and you'll be listed on our website and blog. In addition, you will receive your own personalized copy of the Book.
Price & Sizes
$25 for business card size add, $50 for 1/2 page and $100 for whole page. Use to advertise your business or with a personal message of support, or a photo of your cat or cats!
$10 musicians, service providers, etc. Includes Name, phone number, service or band and music type.
Submit message, scan of card or digital photo along with size of ad to catvandotnr@yahoo.com , or by snail mail, CatVando, POB 851, Maywood 60153. Or, call us, if we're in your area, we'll pick up your card or photo. 708 829 6013
To Pay: click on donate button to pay by paypal, earmark your donation for 'Funky Rockin''. Send check to CatVando, POB 851, Maywood 60153. Please submit by October 12.
Posted by CatVando at 8:53 PM No comments: 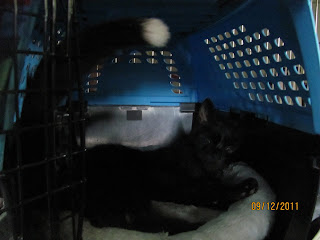 Monet was spotted for the first time in front, leaving the front feeder. The next time we saw him, was 5am on the front porch feeder, then again that day in the back. By Saturday morning, 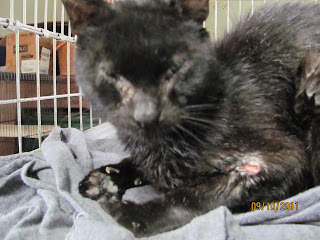 while doing morning canned feeding, he came close enough to put him in a carrier and take him to Elmhurst Animal Care. Monet (named later by his Armchair Adoptor, Stephanie Skrine for the white tip on his tail) was in bad shape. Ematiated, a terrible Upper Respiratory Infection, a large wound on his right shoulder, brittle hair. He weighed in at 5lb 2 oz. He tested negative for feline leukemia and Feline ImmunoVirus. His gums were almost white, one of his canines was broken off at the gum line and his tail was full of some sort of grease. He also had lice, an indication of a very deficient immune system. He was comfortable being cuddled and held but it could be that he was a really sick feral or someone's abandoned pet. - he never purred but did cuddle in. Monet got meds, was treated for lice and given a warm bath, hydrated and given as much food as he would ingest and lots of love but we knew he was so far gone, he might not make it. He didn't. He died yesterday. But he died in safe space. He brings to mind so many like him, out in the streets with no one to care for them and it saddens us. Most of the cats we work with are cared for by people who feed and care for them but the Monet's of the world have no one. A friend said he came here because he knows he'd have love and care in his last days. Who knows. Many find us, sick and healthy. Even tho we can't take care of them all, or many of them, really, we're glad Monet found us and we were able to offer comfort and love in his last days. It's one of the things that makes CatVando, CatVando, and it's one of the things we raise funds to be able to provide.
Posted by CatVando at 9:09 PM No comments:

Here's where you can read what customers say about Melaleuca products. To add your own story or, to ask a question, just comment on this post and it will be posted. Zap It. I love it. My skin has always been sensitive and when I had a blemish, things like Oxy Clearf and all the other things just left dry spots in the place of pimples. I couldn't believe how well the Zap It Stick works. It doesn't dry my skin and it takes away the pimple. My 13 year old son is now using my Zap It and loves it. He's getting the whole system. CM At 28, I'd tried everything for a lifetime of blemishes, black heads and big pours. After 5 weeks on the Zap It system, I have beautiful skin and very few blemishes. Lemon Blossom Sol U Mel I've always used Sol U Mel for smells, stains and laundry but I LOVE the new Lemon Scent for my laundry. One little cap full and it perks up the smell of my laundy. I like the original scent for cleaning and deoderizing but LOVE my new laundry smell. CM
Posted by CatVando at 5:26 PM No comments: 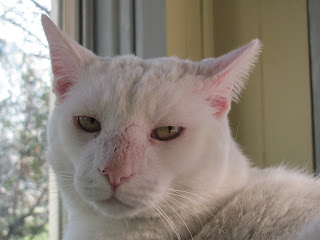 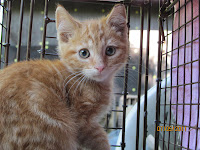 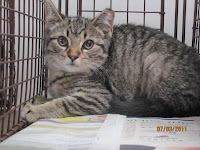 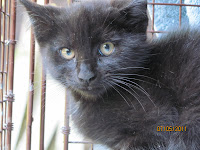 Tender
or they have to go back the the yard..... They are three of the 11 we've trapped and clinic'd. They've lost their caretaker to foreclosure. Right now, we have a temporary feeder bringing food and water but the less cats we put out the better. These three are young and social enough to be further socialized and adopted BUT WE NEED A FOSTER OR FOREVER HOME BY THIS COMING FRIDAY, JULY 7. We have no place them and HAVE to put our focus,, energy and money on working the TNR Program to prevent babies like these from being born in our communities with no where to go and in this case, no home to go to.
Posted by CatVando at 9:15 PM No comments:

Sometimes you see them, sometimes you don’t – but they’re usually there. Street cats. Sometimes feral, which means unsocialized, unaccustomed to human touch. Many ferals are descendants of house cats that have been abandoned, or lost, many times un-spayed or neutered, left to breed uncontrollably. Some street cats are house cats, let out to fend for themselves, or living in and out, again, unsterilized. Many of these cats are lost each year to starvation, inclement weather, or used as fight bait or abused in other ways. Many of these cats live in colonies, hidden during the day, out searching for food in the night. To understand the many myths about street cats see the links provided
TNR, Trap-Neuter-Release, is the most effective means of controlling and reducing today’s street cat population. TNR is a proven procedure in which entire colonies of stray and feral cats are humanely trapped, evaluated, vaccinated and neutered by veterinarians. Kittens reached early enough to socialize are usually adopted into good homes. Adults are released to live in their own territories under the watch of voluntary caregivers.
At CatVando, we do TNR, teach others with cats in their area how to do TNR and colony management. We lend traps and sometimes crates (for kittens) and provide names of resources for new colony managers and concerned citizens. We’re located in Maywood IL and work there and in surrounding suburbs. We also work with people with cats and dogs, connecting them to low cost clinics so that all animals are afforded sterilization so that the tens of thousands of unwanted cats and dogs are not euthanized each day.
We are currently working with our Village to institute a community wide TNR program, to educate current feeders, solicit more feeders, locating cats and colonies to TNR and soon, to work with youth groups, churches and other agencies to build shelters for the street cats to be placed in colony managers yards or, in the event of colonies located at factories or other businesses, on the premises.
If you have cats in your area, or in your home, that are in need of spay or neuter services, please call To 708 829 6013
It is our belief that through working with the animals we can in part, counteract some of the violence of the world and ascribe to Gandhi’s words:
"The greatness of a nation and its moral progress can be judged by the way its animals are treated."